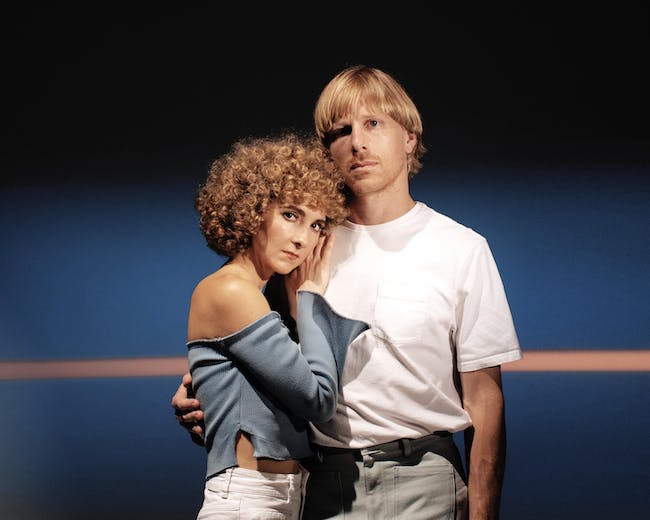 I never learned how to swim.

In years of sailing, I never let the water touch me. The ocean was an abstract dread, an obliterating void as untenable as outer space.

In January 2018 we went on tour. After years of scraping by, we found our footing with our fourth record Yours Conditionally. It was a commercial success that set us up to play the biggest rooms of our career. But three shows in, I developed a raging case of influenza. Each night I dragged myself onstage and croaked out the set in a delirium. After a particularly bad soundcheck, Patrick asked me if we should cancel the show. I couldn’t imagine giving up the thing we’d work so hard to achieve. “I’ll be on stage even if you have to mic my coffin,” I joked.

The next morning I fainted and had a seizure while grocery shopping for breakfast. Patrick carried me through the check-out lanes screaming for a doctor. I woke later in a hospital bed. Patrick leaned over me, crying. “That’s it,” he said. “I’m canceling the tour. I thought you were dead. We’re quitting the band. I’m going to be an accountant.” But I was on the mend. We missed two shows and pressed on.

During sound check at the 930 club, Patrick stepped out to take a phone call. His father had been in the hospital all week, but he had cancer and brief hospitalizations were routine. Back at the hotel that night, Patrick poured two shots of whiskey and handed me one. “I’d like to toast my dad.” He said. “The doctors offered to put him on life-support to give me a chance to fly out there, but I didn’t want him to suffer. Instead, I said goodbye.”

Patrick went home to grieve with his family and rejoined us on the road two days later. I couldn’t believe how quickly our lives had unraveled in the midst of what was supposed to be a milestone in our career. As the tour continued, we found refuge in playing music together. Songwriting had always been an extension of our inner-world. Now we retreated to that world every time we stepped on stage.

After the final show of our tour in Austin, we received another phone call. Patrick’s mother Karen was in the hospital on the brink of a stroke. We got on a plane and went straight to her bedside. Her recovery took weeks. In the hospital waiting room, I wrote the opening line of “Matrimony II”: I only have certainty when you hold my hand.

On a hot July day, after Karen’s return to good health, we sailed as a family into the Pacific and scattered Edward’s ashes at sea. I marked our position on the chart with a small x. The album was already well under way. In that moment, I realized what I wanted to call it.

Swimmer is a tour of the darkest time in our lives. But it is not a dark record. Named for the feeling of suspension and upendedness that characterized this period, it is the story of deep-rooted companionship strengthened by pain and loss. These songs carried us through our grief. It is us at our most vulnerable, so we kept a small footprint, recording everything ourselves in our home studio. I set out to describe the love I have come to know after ten years of marriage, when you can no longer remember your life before that person, when the spark of early attraction has been replaced by a gravitational pull.

With a smoky voice and an affection for the vocal era, girl groups, and Brill Building pop, Molly Burch's yearning indie pop tunes encompass infatuation, defiance, and despair. She made her debut in 2017 with Please Be Mine.

Raised in Los Angeles by show business parents (her father a writer/producer, her mother a casting director), Burch grew up on a diet of classic film musicals and vocal legends like and , and started singing as a preteen. She went on to study jazz vocal performance at the University of North Carolina at Asheville. After graduating, she relocated to Austin, Texas with a goal to write her own music and have a go at a music career. There, she reconnected with guitarist Dailey Toliver, whom she had met in college. They recorded most of her full-length debut at Dan Duszynski's studio in Dripping Springs, Texas in a single day, with minimal overdubs the following day. released the album of reverb-washed love songs Please Be Mine the week of Valentine's Day 2017. She followed it up a year-and-a-half later with the equally stylized but more personal First Flower, which was recorded in Austin with Erik Wofford (, ). Recorded by Jarvis Taveniere () and Will Paterson (), The Molly Burch Christmas Album offered a dozen holiday tunes, including two originals, in late 2019. ~ Marcy Donelson, Rovi