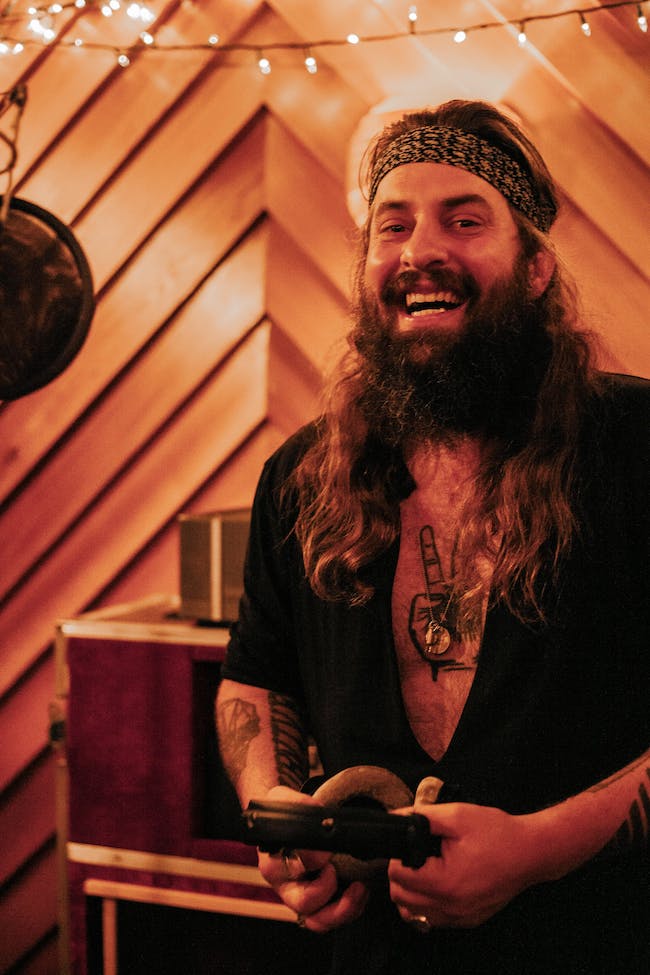 Strand of Oaks: In Heaven Tour

To say In Heaven is about conquering grief would be oversimplifying everything Tim Showalter has achieved on the eighth studio album from Strand of Oaks. A stunning, hopeful reflection on love, loss, and enlightenment, In Heaven is a triumph in music making, and a preeminent addition to the Strand of Oaks discography.

In late 2018, Showalter’s wife, Sue, lost her mother in a car accident. Soon after, Stan, the cat they both adored, was diagnosed with terminal cancer. Showalter quit drinking so he could take better care of his wife and help rebuild the life they shared. And within months, they decided to pack up and move across the country from Philadelphia to Austin, Texas. It was an irrational decision made at the height of a terrible time, but it’s one that shaped so much of what In Heaven is about.

In Heaven was recorded in October 2020 with Kevin Ratterman at Invisible Creature in Los Angeles. Carl Broemel (My Morning Jacket) is featured on guitar throughout the record, while James Iha (The Smashing Pumpkins) contributed vocals and guitar for “Easter.” Bo Koster (MMJ, Roger Waters) provided keyboards, Cedric LeMoyne (Alanis Morrissette, Remy Zero) bass, Scott Moore violin, and Ratterman monstrous drums. Showalter also played a lot of synth on this record, which he hasn’t done since 2014’s HEAL. With clean sounds, Jeff Lynne-esque acoustics, and sophisticated songwriting, he approached In Heaven in a more poised and pop-leaning way than his past releases.

“I wanted to strive for something greater than what I thought I was capable of.”

The result is something extraordinary, as Showalter has crafted a poignant narrative that transcends his personal experiences and achieves a universality rooted not only in loss but joy, celebration, and newfound strength. The gorgeous opener “Galacticana” finds him telling us “I don’t want to drag you down,” a reassurance that his intentions lie in uplifting. But there’s a duality present throughout In Heaven that is palpable, as felt on “Easter,” an exuberant pop anthem featuring jaunty guitar and ethereal vocals courtesy of Iha, that both celebrates Showalter’s new life and references his efforts to “stop the boat from sinking.” It’s a powerful sentiment echoed in slow burner “Hurry,” which showcases some exceptional shredding by Broemel, and beyond, as Showalter explores mortality and a heightened sense of his own existence, intensified by a world where he no longer uses alcohol to cope.

Pairing smart, imaginative lyrics and striking arrangements, tracks like “Carbon” and its magnificent violin stand out, as does “Sister Saturn” with its funky, sinuous groove, and the sublime “Horses at Night,” which features one of Showalter’s most exquisite melodies to date. There’s also a discernible current running through In Heaven of homage to some notable losses in music—John Prine, Jeff Buckley, and Jimi Hendrix all play a part—for In Heaven is about moving beyond sadness or anger to a state of gratitude that we ever had these people to begin with. And while every song provides some clue to Showalter’s personal heaven, the jubilant “Jimi and Stan” says it all, wherein Hendrix and his beloved cat Stan are hanging out, going to shows, and looking at stars together.

And as our musical odyssey ends in the warm embrace of “Under Heaven,” the weight of everything Showalter has manifested—the beauty, and the sadness, and the immensity of it all—hits with tremendous impact. But any sense of hopelessness or melancholy yields to a different feeling entirely, just as he intended. Perhaps we’re feeling stronger, more prepared for something. Or maybe it’s just a reminder: call your parents, text your friends, hug your pets. Listen to your favorite records. And think about what it means to be alive.

Anna Morsett has never been in one place for too long. Whether traveling in her mind or in actual transit, she has always been searching for the steadiness that her band name implies: The Still Tide.

While Morsett’s project has gone through several iterations, hometowns and releases, the one constant has always been her honest, intentional and luminous brand of indie rock. Influenced as much by growing up in the Pacific Northwest as by her experiences traveling the globe as a guitar tech for artists such as The Tallest Man on Earth and Kaki King, The Still Tide is Morsett’s true and heartfelt landing place for her confessional lyrics and intricate guitar work.

With the use of alternate tunings, uncommon capos and a sea of reverb as the signature underpinning for her dynamic voice, Morsett has carved out a space that seems as much for herself as it is for us. “Writing and playing music has always made me feel like I belonged to something other, something beyond myself. It always had the answer before I could think of the question and settled me in the world, made sense of it, of myself. I feel like I’m still making music for my own heart just as much as I am for the hearts of others, hoping they might be carried by it as much as I’ve been”.

From her early days of playing deserted open mics in Portland to years spent singing along with the echoes of stairwells and bathrooms of converted factory buildings in Brooklyn, Morsett has indeed been carried by music, much of it her own. Having sung her songs from west to east, over to Europe and back again, she has come a long way from those youthful beginnings. Whether playing out now with the full band or soulfully on her own, Morsett’s engaging live performances are evidence of miles traveled and of the seasoned musician she’s become along the way.