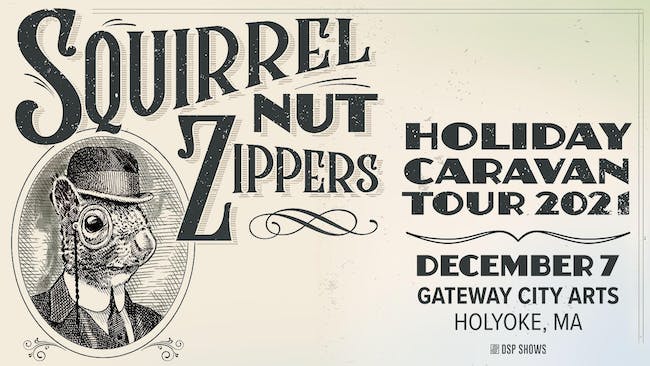 In what’s become a new holiday tradition for many family and friends, the Squirrel Nut Zippers Holiday Caravan Tour makes its return this winter!

The Squirrel Nut Zippers most recent album: Lost Songs of Doc Souchon debuted in late 2020. “This new album was inspired by all of the mysterious characters from the history of New Orleans jazz music,” commented band leader Jimbo Mathus. “It speaks to the hidden roots of where our aesthetic, interests and philosophy comes from. It pulls on the hidden thread.” The album will make its debut on vinyl later this year.

The Zippers began their musical journey in Chapel Hill, North Carolina, in the mid 1990’s, as a musician’s escape from the cookie cutter world of modern rock radio at the time. Jimbo Mathus along with drummer/percussionist Chris Phillips formed the band as a casual musical foray among friends and family in the area. It wasn’t long before the band’s quirky mix of jazz chords, folk music, and punk rock leanings spread out of the region and attracted a national audience.

Between 1995-2000 the Squirrel Nut Zippers sold over three million albums. Their watershed album, Hot (1996) was recorded in the heat of New Orleans, fueled by a smoldering mix of booze and a youthful hunger to unlock the secrets of old-world jazz. This passion mixed with klezmer, blues and random bits of contemporary musical leanings became the bands signature style. At the time, there were few other bands inhabiting this space. The album would eventually break free of any “jazz” stereotypes and land on commercial radio, taking the band to remarkable heights for what was essentially an anti-establishment sound.

With wild live performances of original music, Weege & The Wondertwins channel the vintage vibes of The Kinks, Julie London, Bessie Smith, and more. Prepare to be enchanted, delighted, and thrilled to your core.

Frontwoman Lexi Weege is a true vocal acrobat, leaping from dangerous, sultry growl to playful lilting in a single bound. You would be hard-pressed to find as transfixing a storyteller. Unapologetic, brazen, and boldfaced, Weege’s mastery of narrative is as thrilling as it is wrenching.

Backed by identical twins Tom and AJ DelNegro, drummer Kade Parkin, and guitarist Nick Ferrara, Weege is buoyant on the steady foundation of the self-taught Wonderboys, who lend perfect harmonies and rollicking shout choruses to originals and old favorites alike.

Their debut album “Marigold” arrived in 2017, followed by “Do I Seem Weird Lately?” in 2019, followed by what the band does best: tour. Performing hundreds of self-booked, self-promoted shows all over the country in just a few years, Weege & The Wondertwins are true seasoned professionals, and their work ethic shows.

Weege & The Wondertwins are not to be missed. Like a lone dog howling at the moon in the dead of night, like the open road, or the glowing stars over the desert, they call to you, pull you in with their irresistible magnetism, and make you family.