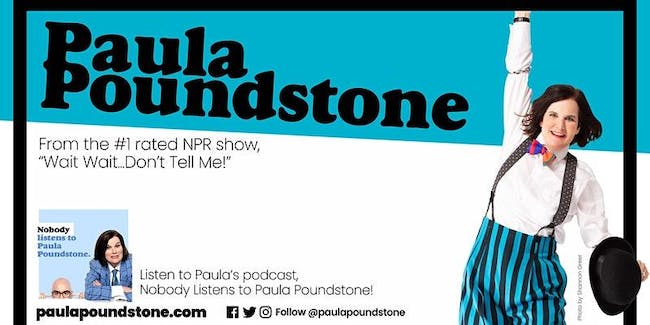 Paula Poundstone is a comedian and author, known for her smart, observational humor and spontaneous wit. When she isn’t collecting hotel soaps on tour, Paula hosts the popular Starburns Audio podcast, Nobody Listens to Paula Poundstone. Nobody is a comedy field guide to life, complete with taste tests, cats of the weeks and leading experts in everything from high-rise window washing to urban chicken farming, copyright law, food safety and surviving a bear attack (although, that guest never made it to the studio…). All put thru the screwball sensibility of Paula Poundstone, while co-host Adam Felber tries, in vain, to keep the show on track

Regular segments include… Career Corner, where Paula finds out if she could do another job other than be a comedian like can she be a welder? A flight attendant? A news anchor? The 100th caller contest, where calls flood in from Adam-obsessed fan, Winnie Fineman from Long Island, Mike “Boom Boom” Bonafit who thinks Paula is b#$%*, and the psychic Sher Eva who “knows” everything. And there are random celebrity sightings at tennis pro Roger Federer’s used appliance store down the street from the studio. We never know who Paula will see next!

Paula’s second book, The Totally Unscientific Study Of The Search For Human Happiness (Algonquin Books, 2017), debuted on the Amazon Bestsellers List, ranking at #1 in Humor. The book was recognized as one of eight semi-finalists for the Thurber Prize for American Humor, the highest recognition of the art of humor writing in the United States. It also won an Audie for Best Audio Book of the Year in Humor, and was one of five finalists for the 2018 Audio Book of the Year.

Paula’s stand-up credentials are endless. She is the star of several HBO specials including Cats, Cops and Stuff and Goes to Harvard. Paula is the first woman, in its then 73rd year, to share the dais with the President and host the White House Correspondents’ Dinner. She won an American Comedy Award for Best Female Standup Comic. Her recent television appearances include The Late Show with Stephen Colbert, and she is revered as a favorite on NPR’s #1 show, Wait, Wait...Don't Tell Me! Late in 2019, Paula was honored to perform stand-up for 2,000 of our troops at the USO Gala in Washington, DC. Recently, she collaborated with renowned music producer and professor at USC Thornton School of Music, Jae Deal, on her first rap single, Not My Butterfinger. In the song, Paula addresses her hatred for the new Butterfinger recipe, while at the same time calling out the bigger changes that need to be made in our country.

Paula is included in innumerable lists, documentaries and literary compendiums noting influential standup comedians of our time. Paula’s stand-up special, Cats, Cops and Stuff was named in TIME Magazine as one of The 5 Funniest Stand-Up Specials Ever.