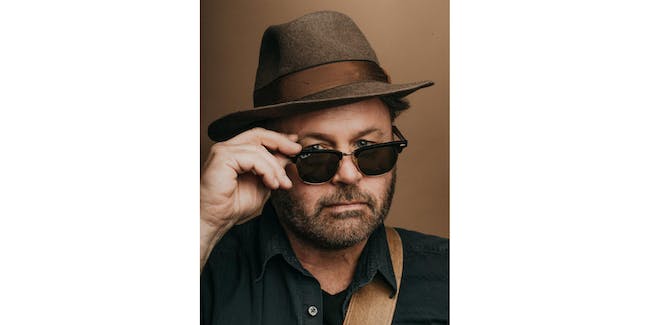 Singer-songwriter Martin Sexton is like an ultra-active antenna, adventuring through the static to grab a clear signal. When he dials in on one station, he then quickly shifts to the next one. This everchanging attention span drives his family crazy, but it’s ingrained in Martin, dating back to his childhood when he would tear through television primetime programming.

This ability to hone in on little defining moments suits Martin as a songwriter as evident by his latest EP, 2020 Vision. This is Martin’s first release in 6 years, and it is a poetically emotive and an elegantly evocative pandemic scrapbook. “In one song, I’m building a treehouse with my son. In another song, I’m crossing America and seeing the beauty in people rising through adversity and loving each other,” Martin details.

The recordings were tracked virtually during lockdown and produced by three-time Grammy-nominee John Alagia, best known for producing John Mayer’s breakout album, Room For Squares. Mayer, who has always championed Martin as a foundational influence, makes a special guitar solo cameo on one of the EP’s singles, “Calling on America.” This 4-song collection will be available on the digital platforms, and also issued as a handsomely-packaged vinyl release.

One constant in Martin’s life and his music is celebrating America. His 1996 Black Sheep album featured a rendition of “America The Beautiful,” and his major-label debut was simply called The American. Also, Martin getting his start in music through leaving his upstate New York hometown with seventy-five bucks and a Stratocaster to chase his aspirations brims with anthemic American Dream overtones.2020 Vision continues this American story.

“I see America as flawed, but not irredeemable. I love that we have community leaders, politicians, actors, and artists from all backgrounds speaking up, raising their voices, and becoming the heroes of today,” Martin says. “My faith is renewed to see the injustices of the world now beginning to be met with accountability. I remain hopeful and optimistic.”

2020 Vision snapshots moment of clarity during the pandemic and beyond. The EP’s leadoff single, “Hold On,” is one of those sun-shining-through-the-rain songs. It brims with soul guitar fixings, punchy horns, and a touching narrative of the simple pleasures of spending time with loved ones. “The silver lining in the pandemic was more facetime with my family. We cut each other’s hair, we biked, and I got around to finally building that treehouse with my son,” Martin recalls. “We finished building it on a sunny summer day, and I grabbed my old Gibson and sat down inside the new fort and this tune presented itself to me.”

The EP’s second single, “Calling On America,” follows in the grand tradition of tender R&B cultural commentary epitomized by soul poets like Curtis Mayfield’s and Marvin Gaye. It’s a scene-setting song panning through visual vignettes of love and harmony while also contemplating division. “I see too much division and hate projected on the airwaves,” Martin shares. “Because of what I do, I travel and meet folks in the world, and although it’s far less common than it should be, I find it encouraging to see people of all walks of life getting along. I believe solidarity through music is a very powerful thing and I’ve always strived to advocate that through my songs and my shows.” The song’s purposeful messaging goes down smooth with folksy acoustic guitar, gospel-tinged organ playing, pining pedal steel, and Martin’s trademark honeyed vocals. “Calling On America” is further enhanced by a John Mayer guitar solo, a lyrical but fleet-fingered statement that hits that sweet spot between blues and country. The EP is rounded out by the impressionistic folk song, “Riding Through The Rain,” and the James Taylor-esque, “Penny from the Land of Plenty,” a powerful and hopeful statement on the opioid epidemic.

Up next, the road is calling Martin as tour dates are being booked in this post-vaccine chapter. 2020 Vision will always have its lessons and remain in Martin’s sight, even as the miles out on the road put pandemic life in the rearview mirror. One of those lessons is the power of togetherness. Martin says: “My mission statement for the past 15 years has been unity through music, and I am committed to sharing peace and harmony through my songs.”

Seth Glier’s new album The Coronation is an invitation to forge a new, more beautiful world out of the current chaos. “For most of my adult life, I’ve held the belief that humanity is right around the corner from something transformative," Seth explains. "If we could only see that our separateness is an illusion, then a future of global cooperation and interdependence would be undeniable. As the coronavirus locked down the world, I watched this long-held belief inside of me becoming a reality right before my eyes. The dolphins returned to the Venice canals, and millions of children saw the stars for the first time. I wanted this album to feel like a roadmap towards reunion in a reconnected and repairing world."

Glier’s sixth album on MPress Records, The Coronation is a beautiful and powerful collection that explores an expansive range of musical styles and topics from the personal to the political. A Grammy®-nominated singer-songwriter, producer, and multi-instrumentalist from Western Massachusetts, Glier has also won five Independent Music Awards. NPR describes his voice as “otherworldly” while praising him as “an engaging performer and storyteller.” His critically acclaimed, emotionally dense catalog of work often draws upon traditional roots music, experimental instrumentation, and moody atmospheres that result in soulfully intelligent stories that can alternately fight the power and break your heart.

After touring 250 dates a year for half his life, not being on the road in 2020 allowed Glier to write from a place of stillness. “If It Wasn’t For You” was inspired by Nobel Peace Prize winner Malala Yousafzai, and echoes the young activist’s own concepts about the transformative power of turning one’s trauma into gratitude and awareness. “Stages” came from the realization that the ups and downs of ever-changing relationships happen in increments, and that change is a natural part of life. "'Til Further Notice" was inspired by the passing of John Prine amidst the uncertainty of lockdown. Learning to understand mistreatment by defining it in words that harness raw feelings is the topic of “A Gift.” The loss of innocence portrayed in “Another Day In America” is grounded in a plea for gun control, and “Poison In The Roots” (featuring Everett Bradley) speaks to the deep systemic inequality in American society. “I didn’t write Poison In The Roots as a duet, but when Everett Bradley sent me a work-tape with him singing the first verse I heard new possibilities everywhere,” Seth recalls. “We were trying to stitch our worlds together.”

The Coronation’s credits reflect the spirit of interconnectedness explored in the album’s lyrics. “I knew at the onset that I wanted to work with many different people and producers on this record but I don’t think I knew why until after finishing it,” Seth explains. “Being in collaboration is a constant reminder that our actions have profound effects on the subsequent actions of others and how powerful it is to be united in common cause.” While The Coronation has multiple producers alongside Glier himself — longtime collaborator Ryan Hommel (Amos Lee, Heather Maloney), Bill Lefler (Ingrid Michaelson, Dashboard Confessional), and Alex Wong (Delta Rae, The Paper Raincoat) — the record has a cohesive, mostly synth-driven sound. Guest artists include vocalists Everett Bradley (Bruce Springsteen, Hall & Oates) and rising star Raye Zaragoza, and cellist Dave Eggar (Coldplay, Evanescence). “I think collaboration might be what makes ‘The Coronation’ a cohesive album,” Glier says. “It’s wildly diverse from song to song, and the making of it began to mirror a new world I wanted to live in.”

Glier will share songs from The Coronation on the road later this year while continuing to connect with audiences using his eclectic, often humorous, and always insightful artistry. Summing up the project, Glier says, "’The Coronation’ marks the emergence of our collective unconscious into consciousness and the transcendence of compulsion into choice. I look at the last year of lockdown as sort of like an extended rehab healing us from the story of separation and offering us the courage to forge a new crown and become the rulers of that which had ruled us.”