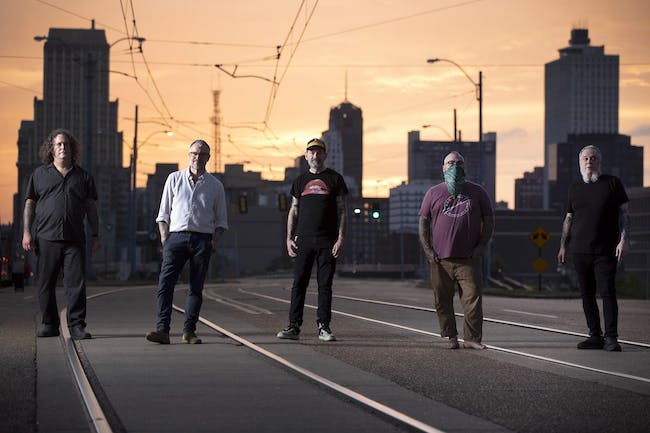 Like the great river that flows through Memphis, the music of Lucero keeps rolling on, twisting and turning through the years, the same dark and brooding steadiness always at work.

Since forming in late the ‘90s, this group of Memphis road-dogs has mixed heartfelt lyrics with the sounds of early rock and roll, classic punk, country-folk, and deep-fried Southern soul. It’s a sound that stands on the pillars of American music, born more of feeling than technique, delivered night after night to legions of fans in dive bars and theaters, and on stages as august as Red Rocks Amphitheater and the Ryman. In short, it’s music that is built to last, impervious to trends.

For their tenth studio album, When You Found Me, the band continues its natural evolution, this time tapping into a more atmospheric, widescreen vision (one that wouldn’t seem out of place on a Reagan-era FM dial) while still staying tethered to its roots.

“I wanted a very classic rock sound for this album,” says songwriter and frontman Ben Nichols. “I wanted it to sound like stuff I heard on the radio growing up. I didn’t want to make a retro record at all, but I did want to reference some of those sounds and tones and moods. I think we struck a nice balance between nostalgia and something that still sounds like contemporary Lucero.”

Long-time fans might be surprised to hear the ghostly tinge of a synthesizer on a Lucero record. But the new direction is not as far afield as one might think. Rick Steff, the band’s piano and organ man of ten years, collects vintage synthesizers, so this new sonic twist was a natural detour for him. With these flourishes, Steff helps conjure an aural world of classic tracks with a firm foot in the present. Nichols’s long-time fondness for film soundtracks likely contributed to the album’s feel as well. The band has also recorded music for every movie made by Ben’s brother, acclaimed filmmaker Jeff Nichols, whose credits include Mud, Midnight Special, and Shotgun Stories.

Lucero recorded When You Found Me over two weeks in July of 2020 at Sam Phillips Recording Studio in Memphis. Matt Ross-Spang, a long-time friend of the band who also produced 2018’s Among The Ghosts, signed on again as producer and engineer. “I don’t think he often records with a lot of synthesizers,” Nichols says, “but he’s a natural and was able to get all the sounds we wanted on the album while making sure we stayed true to ourselves.”

During the recording session, Lucero wore masks the entire time, quarantining among themselves and managing not to get sick. The band had not rehearsed since Covid-19 took root. As such, Nichols’ demos were more fleshed out this time around, complete with drum machine, synth, and fairly elaborate guitar parts, which gave the guys more of a playbook to go by when they entered the studio. “The band did an excellent job of taking those parts and making them their own,” Nichols says. Now a fairly stripped-down five-piece shorn of a horn section, Lucero — in addition to Nichols and Steff, the group comprises Brian Venable on guitar, John C. Stubblefield on bass, and Roy Berry on drums — has been able to explore new sonic avenues in its latest form, as the leaner version has opened up more space in the band’s sound.

In its time, Lucero has sung many a tune about whiskey, heartbreak, and loss — constant occupational hazards for a rock and roll band. But four years ago, Nichols became a husband and father, a major shift in his life that found its way into his songwriting. Nichols says his daughter Izzy, now four, is the center of his universe and influences everything he does. But Lucero fans need not worry: family life hasn’t turned Nichols into a more sanitized, “Dad rock”-type; if anything, it’s made him more expansive and ambitious with the pen, without sacrificing any of that characteristic raw edge.

Family, one of the central themes of When You Found Me, is hardly a new subject for the band. Earlier Lucero albums feature songs about Nichols’ childhood in Arkansas, about his brothers, about his grandfather fighting in World War II (“The War”), about his mother worrying over the fate of her prodigal sons (“Mom”). On a subconscious level, Nichols thinks the new album is about transitioning from being a son into the role of being a husband and father.

Beginning with the band’s last album, Among The Ghosts, Nichols began writing more third-person, character-driven songs, as opposed to just penning the first-person tales of misadventure that were once the group’s stock in trade. The new record’s opening track, “Have You Lost Your Way,” is a case in point, invoking a mythical world that was inspired by the bedtime stories Nichols had been reading to his daughter. “This is my grown up Lucero-version of a fairytale in a way,” he says. “The protagonist is a young girl and there is something evil chasing her … The song doesn’t say exactly how the story ends, but you know she is going to put up a fight.” The tune is bathed in synthesizer, letting the listener know from the jump that something new is coming down the pike.

The album’s next track, “Outrun The Moon,” is another tune written from the perspective of a young girl. An avid reader of history and fiction, Nichols says he had the work of Mississippi novelist Larry Brown in mind when he penned it. “Coffin Nails” tells the story of Nichols’ grandfather dealing with the death of his own father, a veteran of World War 1. “I weigh my deeds on my father’s scales” sings Nichols, giving the song a multigenerational arc. “City On Fire,” originally an attempt by Nichols at social commentary when U.S. domestic unrest reached a fever pitch this summer, ended up morphing into a more timeless, apocalyptic number, a grand rock song featuring an explosive drum part by Berry.

“Pull Me Close Don’t Let Go,” a droning, hypnotic tune, was inspired by words spoken to Nichols by his daughter. The final song on the album, “When You Found Me,” as well as the song “All My Life,” are unabashed love letters to his wife and daughter. The last song is a proper bookend and full-circle moment for a record that begins with a song titled “Have You Lost Your Way.”

“I’m not sure how much longer I would’ve been around if it wasn’t for my wife and daughter and the family I have now,” Nichols says. “I feel like they saved me, and they keep saving me every day. Izzy likes me to sing “When You Found Me” to her now at bedtime after we read the fairytales. She says, ‘Sing me the I’m gonna be okay song.’”

As a band, Lucero is doing more than okay; in fact, they’re at a creative high-water mark. In a time of great uncertainty and change, the band continues to persevere and adapt, making music that still means a hell of a lot to a loyal and ever-growing fanbase. 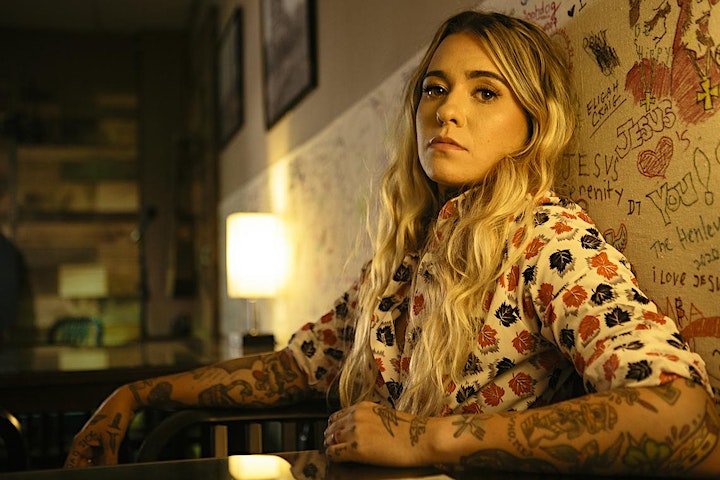 Morgan Wade has never sounded like anybody else, and for a long time, she thought that meant her songs were just for her. “Honestly, I think that was really good for me,” she says. “It made me think, ‘Alright, well, I’m not going to sing for anybody else––but I’m singing for myself.’”

Since then, Wade has figured out that when you grow up in Floyd, Virginia, where bluegrass sustains everyone like the Blue Ridge Mountain air but you hear other sounds like pop and punk in your own head, singing for yourself is the way to become the artist you were always meant to be.

Produced by Sadler Vaden––Jason Isbell’s longtime guitarist and an acclaimed solo artist in his own right–– and Paul Ebersold, Wade’s full-length debut Reckless is a confident rock-and-roll record that introduces a young singer-songwriter who is embracing her strengths and quirks as she continues to ask questions about who she is––and who she wants to be. Her voice, a raspy soprano that can soothe liltingly or growl, is on brilliant display. “I feel like the last couple of years have been me trying to figure out where I fit in, who I fit in with, and what’s going on,” Wade says. “I’m almost four years sober, so a lot of the friends I had, I don’t really hang out with anymore. When I wrote these songs, I was going through a lot, just trying to figure out who I am.”

Now living in Damascus, Virginia, about two hours east of where she grew up, Wade remains connected to the roots that raised her, even as she stretches. “All these bluegrass players would get together out in the streets and play music together,” she says of her little hometown. “My grandfather would go up there every Friday night, and I’d go up there with him and my grandma. I remember falling asleep on their laps, just sitting up there, listening to music.” When Wade began to write her own songs, country radio was dominated by svelte voices like Shania Twain and Faith Hill––and Wade couldn’t hear herself in any of them.

“I’d write songs but didn’t tell anybody about it,” Wade says. “It was like some kind of secret. Even as a kid, it was what I liked to do: I’d go off into my own little world and write songs and stories.”

Wade was 19 and in college when she first performed in public: an open mic in Floyd, backed by a band she had cobbled together via Craigslist. She loved the stage––and soon, her secret writing and singing became a public––and beloved––soundtrack. Wade began touring with her band, the Stepbrothers, and generated a grassroots following and high-profile attention––including that of Vaden.

Asked how she feels about the head-turning voice she used to hide, Wade is characteristically honest, self-deprecating, and insightful. “I still go through moments. I was in the studio two weeks ago and I thought, ‘Can I actually sing? Is everybody just mocking me right now?’” She laughs a little and sighs. “I think it just takes a while. After spending all those years feeling like you weren’t good enough, it takes time to rewire your brain––to know hey: You really do have a good voice.”

Today, with Reckless in tow, Wade is ready to for her voice to be heard. “This is different than anything I’ve ever done before,” she says of the record. “It’s opened up a bunch of different lanes––and I’m proud of it. A lot of the songs are about figuring out what the hell I’m doing.” She pauses and grins. “Maybe record number two will be a little bit more about knowing who I am.”