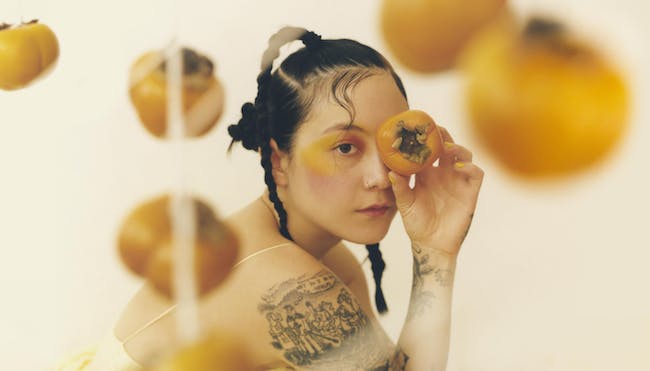 Update: We are now requiring all patrons to wear a mask while at Gateway City Arts, except when eating or drinking. This is in addition to our previous policy of requiring proof of full COVID-19 vaccination (two weeks past second shot) OR proof of a negative COVID PCR test (received within the past 48 hours). If vaccinated, please bring your vaccination card or a clearly legible photo of your vaccination card on your phone. If unvaccinated please bring printed or digital proof of your recent negative PCR test.

Thank you for your support in helping us keep all concert goers, artists, and our staff safe.

From the moment she began writing her new album, Japanese Breakfast’s Michelle Zauner knew that she wanted to call it Jubilee. After all, a jubilee is a celebration of the passage of time—a festival to usher in the hope of a new era in brilliant technicolor. Zauner’s first two albums garnered acclaim for the way they grappled with anguish; Psychopomp was written as her mother underwent cancer treatment, while Soft Sounds From Another Planet took the grief she held from her mother‘s death and used it as a conduit to explore the cosmos. Now, at the start of a new decade, Japanese Breakfast is ready to fight for happiness, an all-too-scarce resource in our seemingly crumbling world.

How does she do it? With a joyful noise. From pulsing walls of synthgaze and piano on “Sit,” to the nostalgia-laden strings that float through “Tactics,” Jubilee bursts with the most wide-ranging arrangements of Zauner’s career. Each song unfurls a new aspect of her artistry: “Be Sweet,” co-written with Wild Nothing’s Jack Tatum, is a jagged, propulsive piece of ‘80s pop that’s followed by a sweetly melancholic ballad in “Kokomo, IN.” As she rides a crest of saxophones and synthesizers through “Slide Tackle,” a piece of nimble pop-funk run through a New Order lens, Zauner professes her desire to move forward: “I want to be good—I want to navigate this hate in my heart somewhere better.”

In the years leading up to Jubilee, Zauner also took theory lessons and studied piano in earnest for the first time, in an effort to improve her range as a songwriter: “I’ve never wanted to rest on any laurels. I wanted to push it as far as it could go, inviting more people in and pushing myself as a composer, a producer, an arranger.” She pours that sentiment into the album from the very beginning, weaving a veritable tapestry of sound on the opening track “Paprika.” To build such an anthem of self-actualization, Zauner maxed out the technical limits of her recording rig, expelling her anxieties and egoism with layers upon layers of triumphant horns and marching snares. “How’s it feel to be at the center of magic? To linger in tones and words?” she ponders, conjuring the widescreen majesty of Kate Bush. “I opened the floodgates and found no water, no current, no river, no rush!”

Later, on “Savage Good Boy”—a kooky, terrifyingly prophetic jam co-produced with (Sandy) Alex G—Zauner reduces the excess of modern capitalism to an emotional level, sarcastically imagining the perspective of a billionaire trying to convince his lover to join him underground as the apocalypse unfolds. “I want to make the money until there’s no more to be made/And we will be so wealthy, I’m absolved from questioning/That all my bad behavior was just a necessary strain/They’re the stakes in a race to win.”

“I don’t want to weave politics into my music in a way that feels cheap, but I couldn’t make something that doesn’t comment on the reality we live in,” says Zauner. “I think that you need to push yourself to care, and that’s part of what this album is about: If you want change, in anything, you need to go to war for it.”

At the end comes “Posing for Cars,” one of the longest, most visceral Japanese Breakfast songs to date. In its muted opening, Zauner quietly re-embraces impassioned facets of youth—wistful daydreaming, fierce loyalty—atop a bed of slowly-strummed guitars. Those same feelings pour out of her fingertips as she erupts into a cathartic, nearly three-minute-long solo to close out the record, with gradual swells of distortion that evoke the arena-sized guitars of bands like Wilco or Sonic Youth.

Jubilee is an album about processing life and love in the quest for happiness, and how that process sometimes requires us to step outside of ourselves. “Savage Good Boy” isn’t the only time Zauner takes on a persona; On the cavernous masterpiece “Posing In Bondage,” she imagines a woman left behind in the confines of an empty house, traversing the blurred lines between domesticity and dominance as she sings to an absent lover. Meanwhile, “Kokomo, IN” was written from the perspective of a small- town Indiana boy, forced to say goodbye to a girlfriend who’s shipping off to study abroad. But throughout Jubilee, Zauner is hardly fictionalizing her lyrics, instead pouring her own life into the universe of each song to tell real stories, and allowing those universes, in turn, to fill in the details. Joy, change, evolution—these things take real time, and real effort. And Japanese Breakfast is here for it.

At the start of 2020, everything was looking up for Mannequin Pussy. The Philadelphia punk band had released their third album, Patience, to abundant critical acclaim, and was touring steadily behind it. After nearly a decade of playing, the band finally had gotten the chance to turn music into a full-time occupation. And then, just as their career was lifting off, the world around them collapsed. COVID-19 reached the United States, rescinding life as many people knew it. Live music shut down. Mannequin Pussy had just played a final show in Chicago when the group had to cancel the remainder of their tour and travel back to their home city. For a while, it seemed like maybe the lull would be temporary, a brief pause before things could resume as they were. And then the numbers ballooned, and the months stretched on, and memories of rooms packed with strangers started to feel alien, dangerous even in imagination.

Mannequin Pussy's new Perfect EP bursts forth from those sprawling months of social isolation and internet-fueled anxiety. After spending most of the year apart from each other and everyone else in 2020, the members of the band -- Missy on lead vocals and guitar, Colins “Bear” Regisford on bass, and Kaleen Reading on drums -- decided to book studio time and work together in person again. They brought two pre-written songs into the session, but opted to write new material together on the fly from the excitement of reunion. "We just figured if we forced ourselves into this situation where someone could hit 'record,' something might come out," Missy says. "We'd never written that way before."

What came out of that compressed session time were some of Mannequin Pussy's most furious, incandescent songs yet. The self-imposed restraint and careful habituation of the past year cracked open. On the EP's title track, Missy sings about the practice of condensing your daily life into a manicured stream of images for social media, an urge that only intensified after daily life grew barren. What happens to the social impulse when everyone you love or even like is leveled into a set of pixels -- when you're compelled repeatedly to funnel your own life into that algorithmic slurry, and wait to see how it's received? "It was a really weird psychological experience, being bombarded by images of other people constantly when you are not around a lot of other people," Missy says. "I'm still understanding the way we use the internet to make our lives feel and look perfect. Our lives aren't supposed to look good right now."

Even the songs written before the pandemic take on a new valence after a year of its frustrations. "I'm in control / That's what I tell myself when all the walls around me close in," Missy sings in the prescient opening lines of "Control." Tuneful and brash, with a white-hot molten core, the songs on Perfect thrash against the learned helplessness that has settled in on the cellular level under lockdown. Social media algorithms apply pressure to perform even from the depths of that powerlessness, to construct the image of a bountiful life in times of extreme scarcity. From the smolder of "Pigs is Pigs" to the melancholic, contemplative "Darling," Perfect digs into the cracks of that compulsory veneer, and let loose everything simmering beneath it. The anger, frustration, loneliness, and resentment of a year spent locked away all come sputtering forth. And once they've rushed out, once the air clears from their tumult, there's suddenly a little more space to seek out calm, to find solace. There's an opening forward into whatever comes next in the rush and the mess of living.