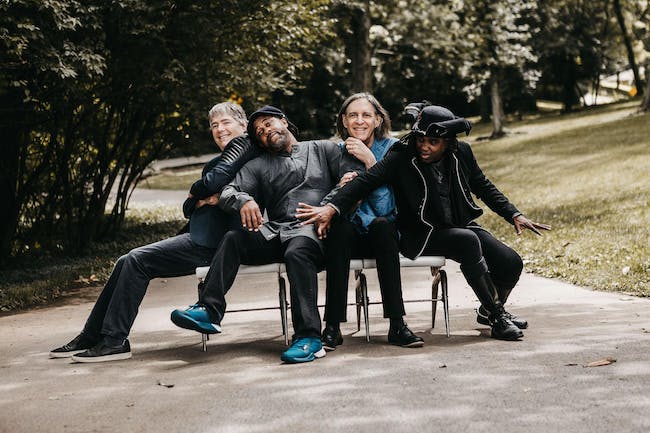 iCal
Google
Groundbreaking, Grammy-winning quartet Béla Fleck & The Flecktones will be celebrating its 30th anniversary with a North American tour.

Banjoist Béla Fleck, harmonica and keyboardist Howard Levy, bassist Victor Wooten and percussionist / drumitarist Roy “Future Man” Wooten have been creating some of the most forward thinking music during their long, storied career. While all manners of genres come into play – from classical and jazz to bluegrass and African music to electric blues and Eastern European folk dances – the result is an impossible to pigeonhole sound all their own, a meeting of musical minds that remains, as ever, utterly indescribable. Simply put, it is The Flecktones: music made only when these four individuals come together.

“All the different things I do come together to make a new ‘hybrid’ Béla’,” Fleck says. “Everybody else in the group is doing the same things, collaborating with different people, and pursuing a wide variety of ideas, so when we come together and put all of our separate soups into one big stockpot it turns into a very diverse concoction.” Fleck first united the Flecktones in 1988, ostensibly for a single performance on PBS’ Lonesome Pine Special. From the start, there was a special kinship between the four musicians, a bond forged in a mutual passion for creativity and artistic advancement. Three breakthrough albums and a whole lot of live dates followed before Levy decided to move on in late 1992.

“I wanted to do other things and there was no time to do anything else,” he explains. “We were probably playing 150 shows a year at that time – maybe more – and it was just too much for me. I’ve never, before or since, done any one thing that much!” Béla Fleck & the Flecktones persevered, playing as a trio and with many special guests, before saxophonist Jeff Coffin joined the ensemble. A succession of acclaimed albums and innumerable live performances continued to earn the band a fervent fan following around the world, not to mention five Grammy Awards in a range of categories.

Still, by 2008, the band had grown somewhat restive and embarked on a temporary hiatus. The seeds of change began with what Future Man calls the “paintbrushes of fate” as Coffin was invited to join Dave Matthews Band after the 2008 death of saxophonist LeRoi Moore. Fleck encouraged him to accept, believing the decision would rejuvenate both DMB and the Flecktones themselves. “We were ready for something different to happen,” he says. “We’d been in a kind of holding pattern. We had the same line-up for so many years that it was becoming ‘normal’, we were all drifting into outside things for new musical invigoration, and we were taking more and more time off between albums and tours.”

Each member had been quite busy with a variety of successful projects – including: Bela’s duet collaborations with Chick Corea, a trio with Zakir Hussain and Edgar Meyer (sometimes with the Detroit Symphony) and his expansive adventures in African music, documented in the acclaimed 2009 film and CD, Throw Down Your Heart. Victor’s solo band tours, camps, recording sessions, clinics and CD releases (including an incredible collaborative project with Stanley Clarke and Marcus Miller called SMV, which yielded the album ‘Thunder’), and Future Man’s creation of his amazing Black Mozart project, and continued developement of new instruments.

Still, all agree that Flecktones music was beckoning them home. The band, which had always maintained a warm relationship with the gifted pianist/harmonica player, recruited Levy for a 2009 tour of the US and Europe, an experience he describes as “extremely invigorating and very energizing.” “It felt just like it did back when we first started playing together,” says Wooten. “Just with a lot less hair.” Upon the tour’s conclusion, the four musicians agreed to further explore the band’s possibilities, sensing what Future Man calls, “an opportunity to revisit the original scene of the crime.” “There were a lot of unfinished aspects to this line-up of the band,” Fleck notes, “in that it stopped right when we were peaking creatively.” For Fleck, Levy’s return enables the Flecktones to follow through on the original concept of a band “where each person was reinventing their instruments, where every one of us was a kind of mutant.”

“There’s a special thing that happens when the four of us get together and play,” notes Levy. “We all have the same attitude of trying to do things that we haven’t done before and coincidentally, no one else has either.” One thing was certain, however. The ‘original’ Flecktones were resolute that their reunion would not be rooted in nostalgia. The goal from the get-go was to drive the music forward to places where it might’ve progressed had things gone differently.

“When we play together, Victor, Future Man, and I all have to step up our game,” Fleck says, “because Howard is going to throw something unexpected at us, which in certain ways, puts us in an uncomfortable zone, but due to that, we have to push through – into our higher selves.”

That said, Future Man took the occasion to unveil a new prototype Drumitar, his MIDI-based device that allows him to trigger samples using his fingers. A central element of the Flecktones sound, the first version of the notorious instrument was on its last legs after more than two decades. More significantly, new advances in technology allowed for the creation of a Drumitar more in line with the drummer’s vision, featuring better dynamics and the ability to record his own spectrum of drum samples.

“Twenty years later, the fruit is really ripe,” Future Man says. “There are things that I was trying to do back then but the sounds just weren’t good enough. Now it’s actually swinging the way I always wanted it to swing.” For many Flecktones fans, the return of the original line-up allows a chance to see a band that many had never gotten to witness before. Indeed, a certain segment of the band’s base discovered them during the Jeff Coffin era and may not even be familiar with Levy’s membership.

“There are people who don’t remember the very beginning of the Flecktones,” Future Man says. “It’s like people that started watching Star Trek: The Next Generation and never got to meet Captain Kirk. So here we go, the original crew of the Enterprise coming together on a new mission.”

Visionary and vibrant as anything in their already rich canon, Rocket Science feels more like a new beginning than simply the culmination of an early chapter. Where the band goes from here remains undetermined, but all four members agree that the promise of Béla Fleck & the Original Flecktones has yet to be fulfilled. “We’re going to have to have this experience together and see how everybody likes it,” Fleck says. “I know that we haven’t even come close to exhausting the possibilities with this record, but we sure went deeper than we ever had before.”