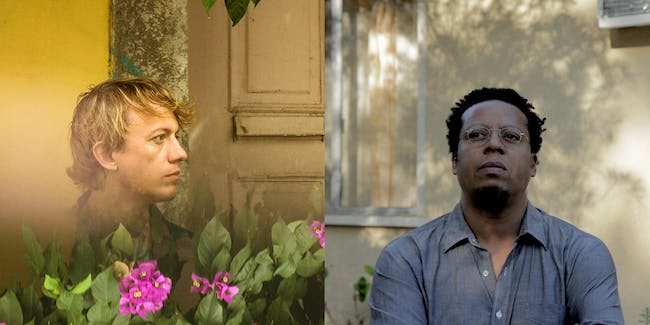 For over a decade, guitarist/vocalist Steve Gunn has been one the American music’s most pivotal figures - conjuring immersive and psychedelic sonic landscapes both live and on record, releasing revered solo albums ranking high on in-the-know end of year lists, alongside exploratory collaborations with artists as diverse as Mike Cooper, Kurt Vile, and Michael Chapman (whose most recent studio album he produced). Gunn is known for telling other people’s stories, but on his breakthrough fourth album, The Unseen In Between, he explores his own emotional landscapes with his most complex, fully realized songs to date. The lyrics evoke voyages, tempests (actual and emotional), and a rich cast of characters met along the way—the work of an artist finding a place of calm in the midst of a storm. Produced by frequent collaborator James Elkington and engineered by Daniel Schlett, the immaculately recorded Unseen forces a reassessment of Gunn’s standing in the pantheon of the era’s great songwriters.

Getting to The Unseen In Between itself was not easy for Gunn. In the summer of 2016, Gunn released Eyes On The Lines, his winning and elliptical debut for Matador. It should have been a triumphant moment, but exactly two weeks later, Gunn’s father and namesake died following a two-year struggle with cancer. During his sickness, he and his son had connected as never before, listening to one another’s experiences and understanding one another’s perspectives; they became not father and son but real friends.

This experience yielded the emotional centerpiece of the album. “Stonehurst Cowboy” is a duet for Gunn’s raw acoustic guitar and spare basslines by Bob Dylan’s musical director Tony Garnier, whose featured throughout the album. The song distills the lessons Gunn learned from his father and it is a solemn but tender remembrance, a tribute to his father’s reputation as a tough, wise, and witty guy from far west Philadelphia.

A sense of musical renewal and emotional complexity fits the new songs perfectly; “Luciano” seems to be about the chemistry between a bodega owner and his cat, an unspoken romance of gentle obedience and quiet gestures. But Gunn peers below the relationship’s surface and wonders about the owner’s lonely future once the cat is gone, a devastating meditation wrapped in soft strings. And then there’s “Vagabond,” Gunn’s graceful attempt to humanize a rich cast of characters whose lives have gone astray, wanderers who live outside of society’s modern safety net, who pursue “a crooked dream” in spite of what the world expects. Supported by the perfect harmonies of Meg Baird, Gunn finds something lovely in the unloved.

Inspired by contemporary artist Walter De Maria’s Dia Art Foundation-affiliated installation of 400 stainless steel poles atop the high desert of New Mexico, “Lightning Field” considers what we get out of art when it doesn’t work, when lightning does not light up the night for visitors. Opener “New Moon” may begin in the mode of a deep track from Astral Weeks or Fred Neil, with its upright bass and sparse tremolo guitar. But during the song’s final minutes, strings double the melody, and then the guitar rushes headlong, pulling ahead in a wave of ecstatic deliverance. It is a brief but liberating solo, an instant release of tension from the fraught scene Gunn has built, complemented by one of his most arresting vocal performances.

In a final contrast, “Morning is Mended” is an acoustic beauty so resplendent it ranks alongside Sandy Denny or Jackson C. Frank. Buoyed by a melody that sparkles like sunlight on still water, Gunn acknowledges the hardships around him, the feeling of being a “nothing sky,” and then moves forward into the world, walking tall into the fresh morning. The song is an apt encapsulation of The Unseen In Between, a gorgeously empathetic record that attempts to recognize the worries of the world and offer some timely assurance. It is a revelatory and redemptive set, offering the balm of understanding at a time when that seems in very short supply.

Jeff Parker (b. Bridgeport, Connecticut USA, April 4, 1967) is a guitarist and composer.

Jeff Parker is recognized as one of contemporary music’s most versatile and innovative electric guitarists and composers. With a prolific output characterized by musical ideas of angularity and logic, he works in a wide variety of mediums - from pop, rock and jazz to new music - using ideas informed by innovations and trends in both popular and experimental forms. He creates works that explore and exploit the contrary relationships between tradition and technology, improvisation and composition, and the familiar and the abstract.

His sonic palette may employ techniques from sample-based technologies, analog and digital synthesis, and conventional and extended techniques from over 40 years of playing the guitar.

An integral part of what has become known as “The Modern Chicago Sound”, he is a longtime member of the influential indie band Tortoise, and is also a founding member of Isotope 217˚ and Chicago Underground. A look at his extensive work as a collaborator and session musician offers a glimpse into Mr. Parker’s diversity. This list includes: Andrew Bird, Meshell Ndegeocello, Joshua Redman, Toumani Diabate, George Lewis, Bennie Maupin, Nicole Mitchell, Peter Erskine, Carmen Lundy, Makaya McCraven, Vijay Iyer, Yo La Tengo, Daniel Lanois, Brian Blade and the Fellowship Band, Jason Moran, Joey DeFrancesco, Nels Cline, Charles Earland, Ken Vandermark, Dave Douglas, Fred Anderson, Tom Zé, Clipping, and hundreds more. Parker has released several albums as a leader, all to critical acclaim, including: Like-Coping (2003), The Relatives (2005) Bright Light In Winter (2012), The New Breed (2016) Slight Freedom (2016) and Suite For Max Brown (2020). The New Breed and Slight Freedom were named two of the Top 10 Jazz releases of 2016 by The New York Times, and The New Breed was named the Top Jazz Album of 2016 in The London Observer. His latest release, Suite For Max Brown (2020), debuted at Number 1 on the Billboard Jazz Chart, and was included on numerous year-end Best Of lists, including WIRE Magazine, MAGNET Magazine, and The Guardian. Renowned contemporary music ensemble Dal Niente premiered Parker’s composition “Water On Glass” at 2017’s Ear Taxi Festival. Branching out into the role as record producer, he has worked with Jeremy Cunningham on The Weather Up There, and Paul Bryan on Cri$el Gems.

As a film composer, Parker has scored several documentaries and contributed music to feature films and video games.

He has been a member of Chicago’s Association for the Advancement of Creative Musicians (AACM) since 1995.

"Parker, probably best known as a member of the post-rock band Tortoise, has absorbed so many styles and worked in so many situations that he really comes across as an individual with vast roots." -Jazz Times Magazine

“His sound is unmistakable, spastic and unpredictable, yet at the same time precise and refined…history will certainly reflect that he is one of the more noteworthy guitarists of his generation.” -Dusted Magazine

“The most humble guitar-god…whether digging into instrumental rock, groove-heavy organ jazz, or post-freedom space music, Parker chooses to highlight the more eccentric elements of his personal style. Rather than morphing to fit the music at hand, he somehow creates the illusion of bending the environment to his own sound.” -Neil Tesser, chicagomusic.org