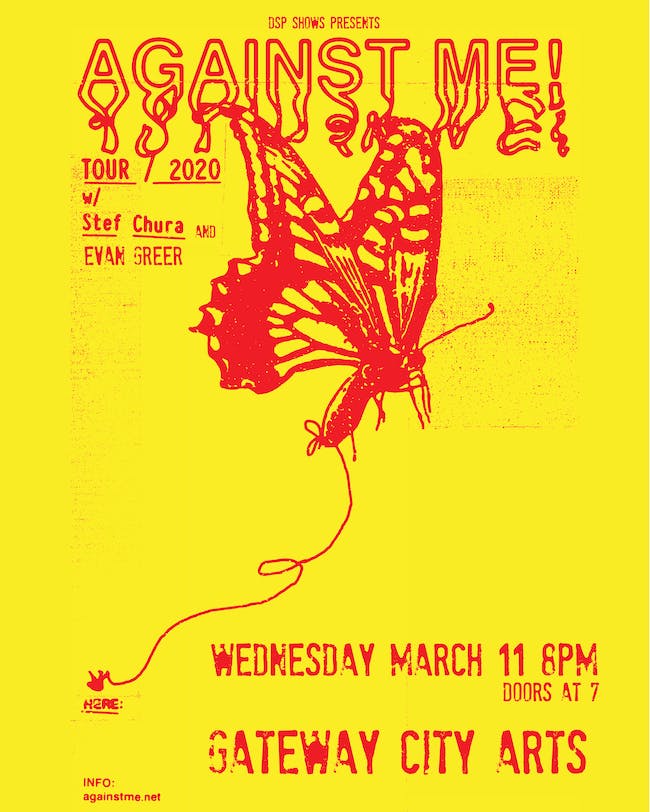 To pirate the title of one of their early songs (and still a set-list staple), Against Me! is a band that laughs at danger and breaks all the rules.

Fronted by Laura Jane Grace, AM!’s much-anticipated, Transgender Dysphoria Blues released in January 2014. The title of their sixth album offers a direct nod to news that shocked fans and shook up the rock world when it was dropped—Grace is a transitioning transgender person who revealed her story in the May 12, 2012 issue of Rolling Stone (readers curious to learn more about the transition can check out Laura Jane’s “My First Year as a Woman” journal online in Cosmopolitan).

Against Me! began as an anarchist solo act in Gainesville, Florida in 1997. After transforming into a traditional four-piece a few years later with the crucial addition of guitarist James Bowman, they quickly became a driving force in the punk scene—despite facing an abundance of unsolicited danger.

While emerging unscathed from two separate road tour spinouts and, more recently, enduring a flying mic stand which cost Grace her front teeth, Against Me! have played in all 50 states and 29 countries, cranking out an average of 200 sweat-drenched, fist-pumping, shout-a-long live gigs per year over the past decade. Their musicruns the gamut from thrashing to anthemic to intimate, with Grace’s pointed lyrics and powerhouse voice blending vitriol and vulnerability like few other performers.

With a healthy dose of folk and even some old-school country in their sound, the band’s first three indie full-lengths (2002’s Against Me! is Reinventing Axl Rose, 2003’s As The Eternal Cowboy and 2005’s Searching For A Former Clarity) earned them a rabid and steadily growing following.

Their 2007 major label debut, New Wave, was produced by Butch Vig (Nirvana, Garbage, Green Day) and named "Album of the Year" by SPIN Magazine. The early-Springsteen-esque raver “Thrash Unreal” reached #11 on the Modern Rock charts, and in addition to a headlining tour, the band also supported the Foo Fighters on the road in 2008.

After 2010’s White Crosses (which peaked at #34 on the Billboard charts), the band parted ways with Sire. It was at this time that Grace went through an intense soul-searching phase and eventually decided to transition, going public with the gender dysphoria she had been dealing with since childhood.

As might be expected with such an intensely personal project, Grace took complete creative control of Transgender Dysphoria Blues. She not only assumed producing reins for the first time but even built the Florida studio, Total Treble, where the demos were recorded. Then—more danger struck. During a tornado, a tree crashed through the roof of the studio.

After that mishap, the full record was recorded without further incident at three separate facilities: Dave Grohl’s 606 Studios in Northridge, California; Motor Studios in San Francisco; and Earth Sounds in Valdosta, GA.

Which is certainly not to say Transgender Dysphoria Blues is a “safe” record. Grace’s soul is brutally laid bare here in this riveting 10-song collection. While four of the tracks directly address the unique anxieties and fears inherent with being transgender, they still crackle with universal resonance.

Joining Grace and Bowman in the band are a brand-new rhythm section.

Inge Johannson (formerly of Sweden’s International Noise Conspiracy, and a surefire winner of the “Scandinavian Ramones Lookalike Contest,” if one is ever held) has come aboard as the full-time bassist.

The new drummer is punk stalwart Atom Willard, who launched his career as a teenager with Rocket From the Crypt and has had stints with the Offspring, Angels & Airwaves, and Social Distortion. Willard replaced Jay Weinberg, who’d toured with the band since late 2010.

In 2014, Grace served as Music Director for MTV's Rebel Music, a series of documentary films about youth, music and global social change, focused on youth protest movements in the most challenging and turbulent parts of the world. Additionally, she is a contributing writer to Noisey where she writes an advice column titled Mandatory Happiness and, alongside the legendary Joan Jett, recently loaned her support for Miley Cyrus' "Happy Hippie Foundation," a non-profit whose mission is to rally young people to fight injustice facing homeless youth, LGBT youth and other vulnerable populations.

Recorded over Against Me!'s year-long, 2014 world tour and helmed by Marc Jacob Hudson (Taking Back Sunday, Saves The Day, Worriers), 23 Live Sex Acts is an immersive compilation of songs that span the band's entire catalog and provides the most comprehensive look into the powerful Against Me! live experience.

"For most people who create art I would assume there is some kind of deep unanswerable hole in your soul as to why you're making it..." So says Stef Chura ahead of the release of Midnight, her gritty, vehement new album, recorded and produced by Will Toledo of Car Seat Headrest - and her first new collection of songs for Saddle Creek, out June 7th. Illuminating that search for answers with a fevered sense of exploration, Midnight is a bold leap forward from Messes, Stef's contagious debut album, with every aspect of her new work finding bold ways to express itself as it rips through twelve restless and relentless new tracks. She also shares the first single, "Method Man," a boisterous three-minutes that melds jagged, skewed guitars with a distinctive voice that has a new-found sense of confidence while touching on a vulnerable moment in Stef's life. She also announces a North American tour in support of the new album. She explains "Method Man" below:

A long time ago I was pondering the literal words "Method Man" while listening to Wu-Tang. There was a person in my life that I had a confusing array of emotions for, sometimes I was in love with him, I admired and looked up to him, I thought of him as superior to me. He was older than me and I was a teenager. At that age I experienced a titanic amount of anxiety that usually expressed itself as silence.

This song was born out of a total frustration regarding a man who seemed "methodical" to me. He was literate. He waxed poetic. Almost someone...how do I say this...that you wanted to be condescending to you? As long as they were talking to you. He drank a lot of energy drinks and had this overall outlook that no one understood him. That he was in on some kind of cosmic secret that I couldn't get. He smoked so many cigs it stained his fingers yellow.

He was always talking, and I was so enamored with this person. I was always nervous to reply. He would go on and on for hours. He sometimes would look at me and be like "oh maybe you won't get this.... maybe you don't get this." I was too terrified to say much.

A couple of years on from the release of Messes, Stef is still based in Detroit, that most singular city which has seen it all, from the no-mans-land of its initial collapse through to the resurgent place it is now. Stef found inspiration from the people she surrounded with herself with, more so than the place itself. It's no surprise that Midnight is testament to those kind of characteristics; a rugged and robust burst of defiance. "I'm usually dealing with the context of what I can't say or haven't said," Stef says. "A kind of spiritual bondage that I would say most people, probably a lot of female bodied ones, put themselves through."

Which is to say that if its predecessor was a raw, somewhat unadorned document of Stef's work, then Midnight is the muscular, swaggering evolution. "This album has a depth to it and a particular sound because of Will," Stef states regarding Toledo's input, whose spiky nuances can be found across the length and breadth of Midnight, the record presenting an exhilarating rush of sound and color as Stef's spirited vocal finds and signature guitar sounds unravel alongside in a thrilling meeting of ideas and influences; dispelling demons, song by song.

Equal parts thrilling and angsty, Midnight is a testament to the collaborative process, a record that makes the very most of those who came together to make it, but more than that, it's a firm statement of tenacity and perseverance, of not resting on your laurels but leaping forwards no matter the situation you find yourself in. From out of one day and into the next.

Evan Greer is a trans/genderqueer activist singer/songwriter, parent, and organizer based in Boston. She writes and performs high-energy acoustic songs that inspire hope, build community, and incite resistance! Evan tours internationally as a musician and speaker, and facilitates interactive workshops to support movements for justice and liberation. Wielding an arsenal of fiercely radical songs that vary in style from pop-punk poetry to foot-stompin’ bluegrass singalongs, Evan has been honored to collaborate, tour, and share stages with artists as musically diverse as Pete Seeger, Against Me!,Talib Kweli, Tom Morello of Rage Against the Machine, Against Me!, Ted Leo & the Pharmacists, Michael Stipe (REM), Amanda Palmer, Immortal Technique, Kimya Dawson, Thurston Moore (Sonic Youth), Hari Kondabolu, Billy Bragg, Pamela Means, Anti-Flag, Downtown Boys, The Coup, Anne Feeney, Oi Polloi, Dispatch, Dirty Projectors, Screaming Females, and Chumbawamba. She's currently the campaign director for Fight for the Future, the viral digital rights nonprofit behind the largest online protests in history. Evan writes regularly for The Guardian Time, Newsweek, and HuffPost, has been a guest on Good Morning America and All Things Considered, and has been interviewed about her music activism by the New York Times, Rolling Stone, TIME Magazine, Pitchfork, NBC News, Billboard, the Wall Street Journal, Spin Magazine, CBS News, Washington Post, Democracy Now!, The Atlantic, The Nation, CNN, Mother Jones, and even Fox News.